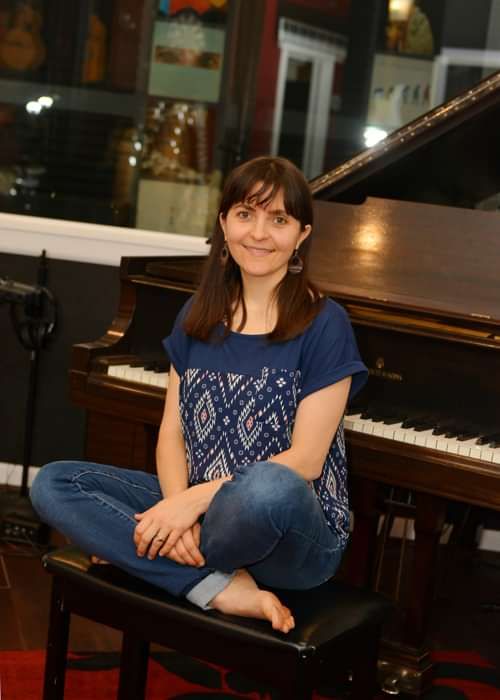 Amanda Dangerfield is an American pianist, composer, recording artist, and video creator. (Stream her debut album.) Her new song, composed to go along with lyrics by Lynda Crawley, will be released in the summer of 2020.

Amanda started lessons with Roger Lewis -- creator of the MusicMaster™ Series for Piano -- when she was nine years old. No one ever had to remind her to practice the piano, because she loved to play! Because Roger encouraged improvisation and composition, Amanda composed a few pieces for the National PTA Reflections contest, starting when she was 14 years old.

About 20 years later she fulfilled her dream, in December 2017. She went to a studio and recorded her compositions, "So Many Things to See" and "A Small Miracle," plus various cover songs, and releasing her debut album on Spotify, Napster, Tidal, Apple Music, and other music streaming platforms.

When Amanda was in high school she took the school's first AP Music Theory class and scored a 5 on the test. She loved participating in choirs, bell choir, and musicals, and she received a small scholarship for college. In 2002 she earned a Music Liberal Arts associate's degree from Brigham Young University-Idaho.

In addition to performing solo, Amanda has experience as a wedding pianist, as an accompanist, and playing in the background during nursing home events. To hire Amanda for a wedding, click the contact page.

In 2016, exactly like Amanda had, her daughter auditioned for the first time and got the role of Gretl in The Sound of Music! A week before opening night, they (AC Davis High School) suddenly no longer had a pianist. Amanda was able to be the pianist they needed. She also played piano for Warehouse Theatre Company's The Best Christmas Pageant Ever that same year, and she was one of two pianists in Davis High's Beauty and the Beast the next spring.

Amanda loves beautiful music including contemporary classical a.k.a. neoclassical music, new age music, old/vintage love songs and jazz standards, some from musicals, and some country music. The more well-known songs on her debut album are "Ten Minutes Ago" from Rodgers and Hammerstein's Cinderella, "More (Theme from Mondo Cane)," and one old Sesame Street Song. Amanda's compositions could be considered contemporary classical.

Amanda is happily married, and she and her husband are raising four wonderful daughters. She loves educating them at home, using The Family School, The Good and the Beautiful, The Universal Model, and MusicMaster™ / MiniMaster™ lessons.

By signing up you agree to receive news and offers from Amanda Dangerfield. You can unsubscribe at any time. For more details see the privacy policy.